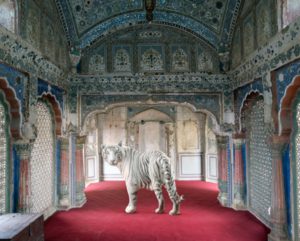 I have taken time, contemplating these images .I perceive silence in the works of India Song, the photographic series of the artist Karen Knorr (Frankfurt on Main, 1954).

I also see a place that is of another world. And a light straining to be different, which resembles another. Distilled, it emerges from an uncanny clarity. Not human.

Within this quiet incandescence is an invitation to inner displacement, drawing us into psychic travel into a new world where appearances are suspended by dreams. Reality or fiction, that is the question.  Motionless animals reside in extraordinary rooms in India, characters barely turned into actors become a form of crystallized theater, fragments of suspended action leading to abstraction displacing the visible.

Regarding India Song’s images it appears that we have interrupted a secret theatre. Yet at the same time, this stillness is not without tension.  It reminds us precisely of the secret ties that bind us, indissoluble, to the mystery of the visible. Images, where life and inert stone, breath and mineral, intermingle, confusing us. Images, referencing other  images, in that quiet conversation -I see sometimes  in her artwork an ashen Balthusian appearance- posed in a new world, scenes seemed mired in lethargic spaces. A loss of consciousness is posed not without concern, guiding a vision which reflects upon reality and its alleged clarity.

Silence. Each place is mysterious. The palaces once inhabited with colors and secrets, emerald green, raspberry juice red, immaculate blues, pieces of glass ….the colors show ineffable dreams of the spirit (dixit Kandinsky). Animals take their position in interiors which feel the rustle  of the sound of feet crossing firmly, whispers or fleeting laughs.

In her long and renown career, Karen Knorr is an artist that has created a certain theatrical reality, proposing constructed portraits but always immersed in a joyful classicism made up of contradictions. This has given her work a radical character since art lives within the art of tensions and dies of distractions,(as in Zóbel’s work).From this oblique fictional glance, her work is overcome  by intense concentration, altering  it into  a kind of ominous silence. The image is transformed into a container of energies that investigate what she distrusts in  the images regarding  their ambiguous mystery and power of evocation, as that which is beyond reality, supernatural.

A serene art of unity and whole accompanies a creativity that avoids the shadows. Karen Knorr’s work is above all, a meditation on the subtle things that underpin our ancient world. Knorr has addressed the critique that has incessantly run its course, about the function of the image and its ability to generate symbolic attributes, reminding us of that meaning that Barthes gave to images as a place of resistance, an ineffable space for transfiguration and the resurrection of another world. Hidden excesses, but time is also another key issue addressed by this visual artist who in undertaking the resurrection of the new cosmos of images, promotes an extraordinary reflection on the passing of time. . The same time that nudges us, step by step, into the abyss. Pleasures of the Imagination, as Karen wrote beneath a picture of one of his series, “Connoisseurs” (1986-1988).

Will these images’ beholders be the ones who dream?

Each image proposes its palimpset , revealing access to a depth left ajar.  The India Song” series was started in 2008, however many of those presented in Slowtrack are just from one year ago and indicate an ongoing dialogue with Indian heritage. Knorr explores the spaces and rituals enacted  in them and somehow, yet there is no innocence, again her inquiries lead back to an older series to  “Belgravia” (1979-1981) or the acclaimed  “Gentlemen” (1981- 1983) reflecting  on power relationships .Photographs? No. Rather, visual strategies that assume the representation of desire and secular myths. These are ambitions of artists ever since the appearance of perspectival realistic images. Under such enchantment, Karen Knorr pierces the world of appearances with sensitivity but mercilessly, and creating a new space in which she unfold an unknown plenitude, a kind of transfigurative epiphany of the commonplace.

[Alfonso de la Torre curated the retrospective exhibition dedicated to Karen Knorr at the University of Cordoba, on the occasion of Pilar Citoler Award, given to the artist in 2011].